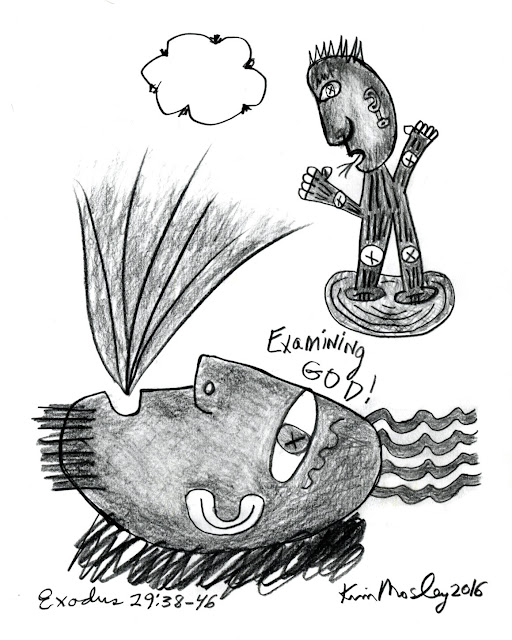 “It shall be a continual burnt offering for your generations, at the entrance of the Tent of Meeting before the Lord, where I will arrange meetings with you, to speak to you there.”

“There I will arrange meetings with the children of Israel, and it will be sanctified by My glory.”

“I will dwell in the midst of the children of Israel and I will be their God.”

There is the obvious implication here that when God says that he will be their God that he won’t be the God for someone else. Of course, if a parent would say to their kid that they’d be their parent, that doesn’t mean that they wouldn’t be the parent of another kid... but this is different.

God brought the Israelites out of Egypt as an act of favoritism. You could say that the Egyptians used them as slaves and deserved the plagues. But the Israelites also took slaves, sometimes from their own tribes, and sometimes others.

Was this really a God for all people? If God were to dwell in the midst of the Israelites was she also in the midst of other? It would be possible if you think of God as part of everything... but then the favoritism implicit in the statement, “... I may dwell in their midst.” doesn’t make a lot of sense.

So one approach here for a Rabbi to take is to tell me not to throw out the baby with the bath water. Sure there are some parts of the Torah that don’t suggest that God loves everyone... but look at the great laws that were given to Moses.

Certainly even yours truly could be dismissed for a variety of reasons, but I hope that one would look at my whole being before such a severe judgement.

Another approach would be to read God as a parent—that her love for one group doesn’t speak to her love for another group. But you do have to play favorites if you are deciding where the next tornado will touch down or who wins the primary in South Carolina.

Oh, you say, God doesn’t rig the ballot box. If so, one could retort, then why pray? Is it so you can connect to the divine? To what advantage, one could ask? At which point, blows could be exchanged and more beer could be consumed.
Posted by Kim Mosley at 8:51 PM