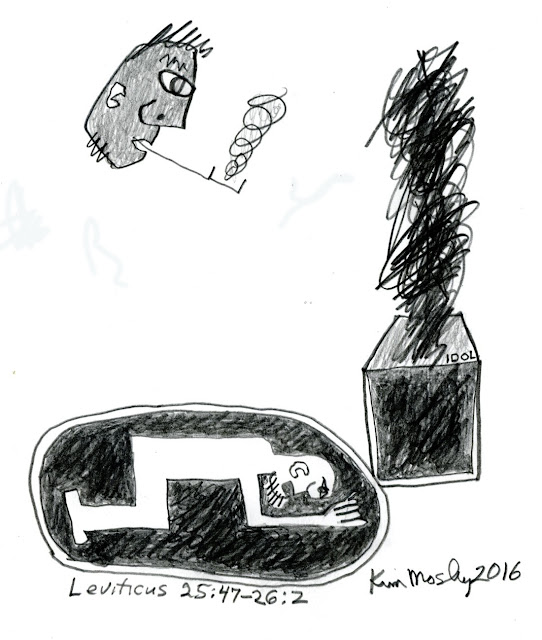 Is this about God not being able to share? I like to think of “making idols” as knowing, where “not knowing” is about not attaching ourselves to that which we cannot know. In the same way that all the commandments are important, so to is it presumptuous to choose one person or thing to idolize and not another.

I believe that we should not even idolize God because we cannot know her. Idolizing is reducing something bigger than we are to something we can understand. But we can’t possibly understand the unknown in the same way that a two-dimensional shape can't know what it would be like to be of three dimensions.

It is convenient to have statutes to worship. It is interesting (and I may be wrong) that for that years after their death, there were no statutes of Buddha (500 years  after his death) or Christ (200 years). As Blake wrote, “never pain to tell they love, love that never told can be.”
Posted by Kim Mosley at 9:07 PM No comments: 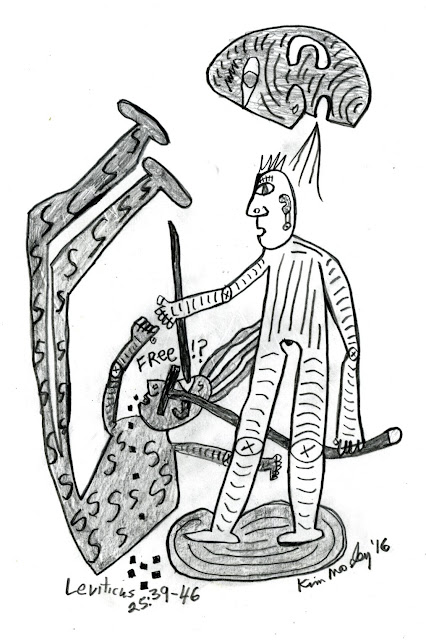 “And if your brother becomes destitute with you, and is sold to you, do not work him with slave labor.“ (Leviticus 25:39)

In the NJPS (New Jewish Publication Society) the word kinsman is used. A brother/kinsman is one from your own country, as opposed to a slave that you would get from another land. It appears that slaves (from other lands) wouldn’t go free in the Jubilee year.

How is it that a group of people who placed justice as one of their highest values would have slaves? It is more understandable if the slave worked for you because they were indebted to you... but taking slaves in war? Is that right?

We know that Jews had a big role to play in the Civil Rights Movement. So this acceptance of slavery didn’t prevail. The idea of treating well your brother/kinsman slaves points to the beginning of realizing that we shouldn’t treat (some) as slaves even if we could. But what about those from another land?

Later we read that if you poke out the eye of slave or knock out a tooth you should let him go. So there is some movement toward ending slavery altogether. Maybe this was economically and morally as far as this ancient civilization could go.

I wrote this a couple of weeks ago, but didn’t post it because I hadn’t done a drawing for it. Now I think about something a rabbi said a few years ago, and something that Buddhists ascribe to their vows. It isn’t that we don’t follow the commandments (vows). It is that we don’t follow them yet. Doing the right thing is a path. We should try to improve. That’s the best we can be and/or do.
Posted by Kim Mosley at 3:56 PM No comments: