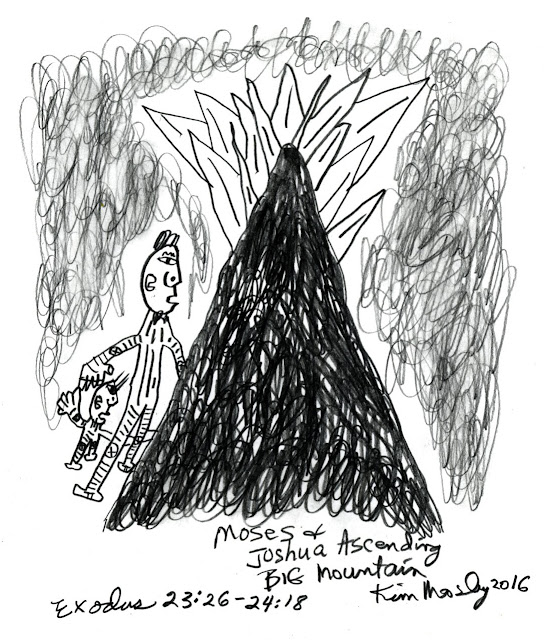 “And the Lord said to Moses, ‘Come up to Me to the mountain and remain there, and I will give you the stone tablets, the Law and the commandments, which I have written to instruct them.’” (Exodus 24:12)

“And the appearance of the glory of the Lord was like a consuming fire atop the mountain, before the eyes of the children of Israel.” (Exodus 24:17)

“And Moses came within the cloud, and he went up to the mountain, and Moses was upon the mountain forty days and forty nights.” (Exodus 24:18)

We have Jonathan Slater from the Institute of Jewish Spirituality here in Austin this weekend. He has been talking about how Abraham had the Torah, or Torah, which he says is the wisdom that permeates our lives. I asked him if the Torah was discovered or created. I told him how I felt that the dharma in Buddhism is discovered and then forgotten (when it is time for a new Buddha). He also spoke of God as being not something out there but rather something throughout everything.

I asked him about my conception of God—that it is a word we use to describe that which is indescribable. He agreed, but added that it was an experience, with which I agreed. I don’t think one can deny God any more than they can deny love or beauty. Though they (God, love, beauty) may have no scientific basis, even if they have move us in profound ways.

In Buddhism, we call stretching the truth skillful means. It is the idea that you need to present a situation in a way that it will take someone to the next step. As Torah (as opposed to The Torah) lives and develops, we find new ways to present the information.

I regret that so many have been presented with liturgy that is so hard to believe given our knowledge today. Miracles aren’t events when laws of nature are broken, but rather when the spectacular occurs. A beautiful sunset, the birth of a child, and the beating the four-minute mile are all miracles. The fact that I’m able to write this and send a link daily to almost 2500 people is pretty amazing. My friend, N, says that those things aren’t miracles. I disagree.

It took the Israelites 40 years to get to the promised land. And none of the original troopers made it. It took Moses 40 days to get the tablets. And it took Christ 40 days of fasting in the Judaean Desert, during which time he fought with Satan. I guess when their writers were thinking up numbers they have limited imagination.

“I will send My fear before you, and I will confuse all the people among whom you shall come, and I will make all your enemies turn their backs to you.” (Exodus 23:27)

God makes some mighty promises. Some say he didn’t keep to his promises because we didn’t follow his rules. But perhaps his rules were skillful means to get us to the next step in our lives. But there are cost and benefits to promises that aren’t kept. Trust is lost, exemplified by the many Jews who questioned God’s love after the Holocaust.