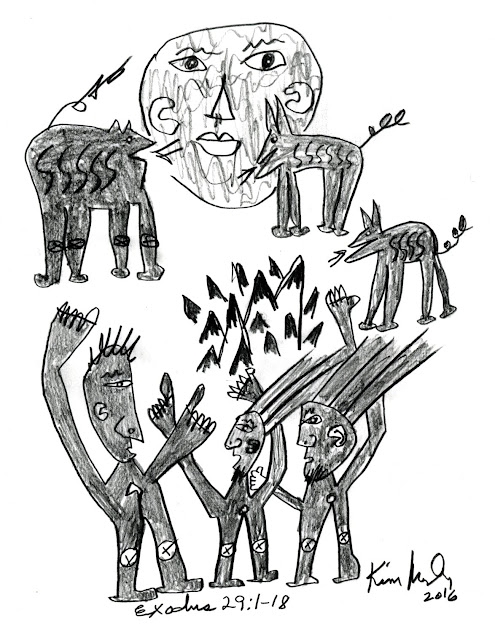 “The Lord spoke to Moses saying:
Speak to the children of Israel, and have them take for Me an offering; from every person whose heart inspires him to generosity, you shall take My offering.” (Exodus 25:1-2)

And todays portion starts with:

“And this is the thing that you shall do for them to sanctify them to serve Me [as kohanim]: take one young bull and two rams, perfect ones.” (Exodus 29:1)

and this portion ends with:

“and you shall make the entire ram go up in smoke upon the altar; it is a burnt offering made to the Lord; it is a spirit of satisfaction, a fire offering for the Lord.” (Exodus 29:18)

I want to work with this idea of offerings. First, making an offering suggests that God has a consciousness to notice that an offering was made. I think it would take a lot to convince me that this was the case.

When I first read of these offerings I felt that they were both cruel to the animals, and that they were wasteful, given our limited resources on Earth. Neither of these attitudes seemed to bother the Israelites.

In the last line (Exodus 29:18) we hear that the animals should be perfect. And yet, nothing is perfect but God. And even God's perfection cannot be seen, because the viewer (us) cannot see that well. We more create what we are looking at (in our own image) than really see.

The offerings ended with the destruction of the second temple. They say it is because there was not a place to do the offerings, but perhaps another factor was that they grew out of the need for them.

If the offerings were the only way to get from impurity to purity, then were the Israelites continually impure from that point? It seems that if they were still believed in so throughly then they would have built another Tabernacle to perform the rituals.

I've heard that studying the Torah took the place of the offerings. See: http://www2.kenyon.edu/Depts/Religion/Projects/Reln91/Sacrifice/sacpage2.htm The article quotes the Talmud: “Whoever is busy with [learning] Torah need not bring an Olah, Chatas, Mincha, or Oshom (types of sacrifices).”

Interesting that circumcision is the only remaining sacrifice.

The article above also mentions that the offerings were not to appease God, but rather to draw us closer to him. So they were a form of prayer.