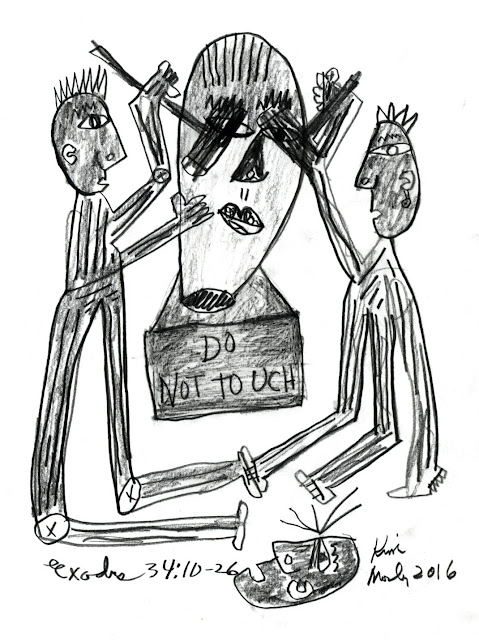 At 16, I was a member of a religious discussion group at the Baptist Church near the University of Chicago. It was so liberal that they had been kicked out from the Southern Baptist Convention. The minister who led the group called me a religious globe trotter. Perhaps I told him that one Easter Sunday I went to six churches. That was after my mom forbid me to go to church, saying I was too impressionable.

As I look at the Torah, I waiver between wanting Judaism to be one of my religions or not. One day it is yes, and the next it is no. My dad thought intermarriage was the salvation of the world. On the other hand, my grandpa promised me a Jaguar if I married a Jewish woman.

I actually like how the Torah pushes my buttons. It is part of the cleverness of the Torah—it continually challenges me to explore my tendency to “leak,” as Buddhists put it. You can read here (http://www.buddhastate.com/2012/11/fixing-the-dharmic-plumbing/) about Dharmic plumbing.


“Beware lest you form a covenant with the inhabitant[s] of the land into which you are coming, lest it become a snare in your midst.

But you shall demolish their altars, shatter their monuments, and cut down their sacred trees.   For you shall not prostrate yourself before another god, because the Lord, Whose Name is “Jealous One,” is a jealous God.

We are aghast today when ancient monuments are destroyed. How should I take this? It almost makes me physically sick every time I read that line, “But you shall demolish their altars...”

No wonder the Jews have been persecuted. They deserved it if this was their practice. Of course, there is the issue of whether two wrongs make a right, and we usually agree abstractly that they do not.

The Israelites were projecting their immaturity onto God, saying he was jealous. Hopefully we are more tolerant now of those with views different from our own. We realize now that there are many ways to skin a cat.

And even Christ was intolerant to non-believers. One reading of his “I come with a sword...” is that he came to separate kids from their parents because their parents practiced other beliefs.

In fact, the idea of not treating others as you not want to be treated directly opposes this section, as does the “Do not mistreat or oppress a foreigner, for we were once strangers in a strange land. (See: http://www.centralreformtemple.org/ai1ec_event/torah-study-strangers-in-a-strange-land-jewish-views-on-immigration/?instance_id=) for many teachings on this theme.

So why does the Torah contradict itself? Is it different than the way we behave? Is it an opportunity for us to look in a mirror.

We put people in jail for torturing their dog, and then we kill and eat our farm animals. Are we hypocrites in so many instances?
Posted by Kim Mosley at 9:00 PM