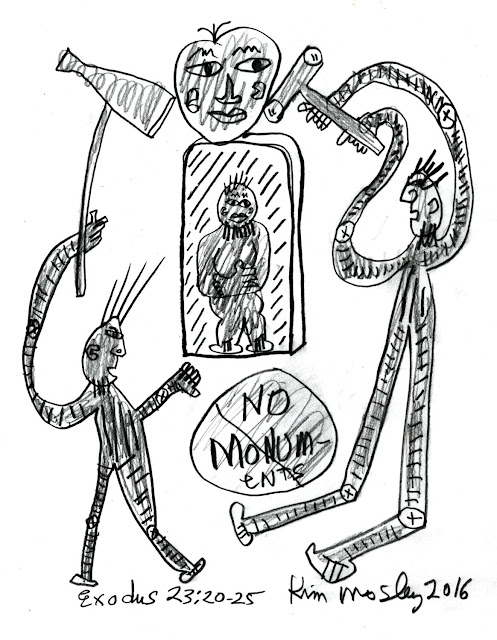 “For My angel will go before you, and bring you to the Amorites, the Hittites, the Perizzites, the Canaanites, the Hivvites, and the Jebusites, and I will destroy them.

There are a few lines that pushed a few buttons. My first thought is that this is the tipping point. I will never be a Jew.

Luckily, before I could burn my Torah, a friend came over and I told her about the destruction of the monuments for other religions. I explained to her that this might be the first step toward pluralism... that as we contemplate such a destructive act we would not do it.

Can the Israelites not destroy the monuments? One has to follow the Torah, don’t they? I then made the argument that stoning is the first step toward ending capital punishment. She took the opposite view, saying that stoning would eventually make people less sensitive to killing others.

Later, at Friday night services I asked another friend, “why destroy the monuments?” Our conversation led me to another conclusion, that the Israelites believed that worshiping other gods was detrimental to the existence of society. I believe ISIS took a similar perspective. Hitler, as well, believed that the Jewish people were detrimental to the betterment of mankind. These are all (IMHO) dangerous. The road to hell is paved with good intentions, as the saying goes. I just read that half the women in Indonesia have had their genitals altered. Again, from a liberated American’s viewpoint, good intentions gone bad.

I wish that God would say what she means. Really! Isn’t life hard enough without being given commands that we are supposed to kill and destroy when really she wants to make us more compassionate and pluralistic.

It is one thing not to worship false idols and another to destroy the idols of others. We blamed the Muslims for destroying relics, and then find that we (Jews, that is) are supposed to do the same thing.

Would I send my kids to a school that taught them to kill people who weren’t in their tribe? And then tell them, to add insult to injury, to destroy their monuments. (Actually, my grandkids go to school at the temple.)

Geez, glad I don’t have a problem with blood pressure. Leaking again. Rationally I can find a way of reframing this positively. Buddhists call this an “an opportunity for practice.” If this is an opportunity for practice... destroying six groups of people and their monuments... what about the Holocaust? Did we (Jews, that is) start the whole Judeo-Christian ethic? Was it even an ethic.

The problem with an eye for an eye, as I mentioned before, is that we’d all be blind, as M.L.K. jr. said.
Posted by Kim Mosley at 8:46 PM