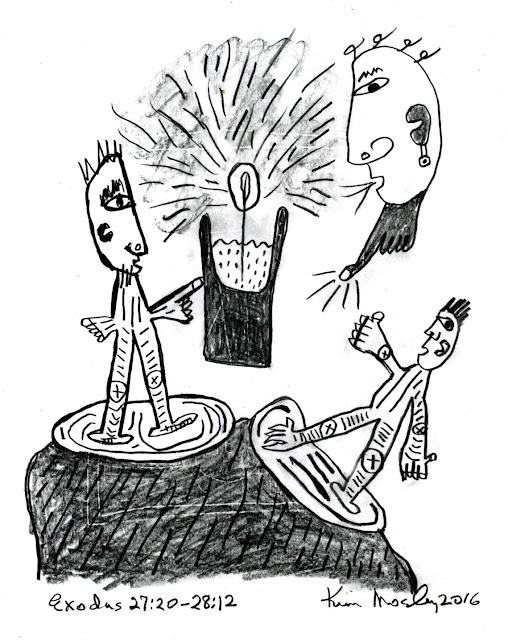 “And you shall command the children of Israel, and they shall take to you pure olive oil, crushed for lighting, to kindle the lamps continually.” —Exodus (27:20)

This portion speaks of the eternal light... the light in the temple that is supposed to always be lit.

In http://www.chabad.org/dailystudy/dailywisdom.asp?tdate=2/14/2016 I read about how we can’t all be priests because there is work to be done in the world. That’s why we do what we do and then support the priests. But it also talked of the priest within all of us—a portion that we allocate of ourselves (beyond our money) to the divine. Sweet thought, especially on Valentines Day.

I attend a group called “Hidden Lamp” at a Zen temple on Sundays. Today I left extra early because I needed to take a much longer route there because of a marathon in town. That longer path was stuck in a gridlock, so I circled back around and thought I’d get as close as I could, and then walk the rest of the way, crossing the path of the runners. That too failed. All the possible parking spots were only for residents of that neighborhood.

I scolded myself for being so upset that I couldn’t get there. What good has all this meditation been if I can’t even endure a little difficulty in my life? I was on the outside and couldn’t get in, or visa versa. I was frustrated as hell. A simple job was undoable. I finally gave up and went home. The lamp was truly hidden.

When I got home, I discovered our other car’s battery was dead. So off to Costco, stopping at Home Depot, Sprouts, and then Costco. Then I read the Torah portion, standing in line at Costco. By that time the race was over... and what I thought would be a quiet afternoon at home turned out to be a marathon of my own.

I enjoyed reading about how the lamp needed to stay lit. Maybe that’s our obligation. To keep our lamp lit so we can help others keep their light lit. And the dead battery didn’t help, but now it is replaced... and I received a refund of $2 and change. Always nice to buy something and have them give you money.

In any case, though I “suffered” with missing the Hidden Lamp, I knew all along that I shouldn’t be suffering. I realized that the suffering was much worst than the mishap itself. In fact, it turned out that the others did fine without me. I was just a child screaming “I want it. I want it.” And I could really see myself “out of sorts”... perhaps an improvement for me... but it didn’t seem to help.

But something good happened when I read about keeping the lamp lit. Even if the lamp was hidden to me, it could not be ignored.

And who was I, complaining about a little frustration when the Israelites took 40 years in the desert to get to the promised land... and their journey was so arduous that only their children made it... only to find that things were not so peachy in the promised land?

So my new mantra from the day: kindle the lamp continually. Keep it lit. Shield it from wind and water. Don’t let it go out. Whose lamp? Mine? Others?