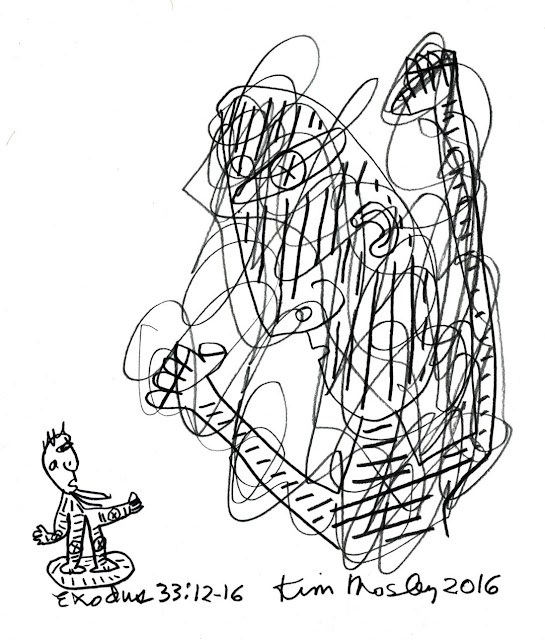 Yesterday I didn’t want to have anything to do with Judaism. Yes, both God and Moses were having temper tantrums. And we thought they were angry because the Israelites were worshiping the wrong god... a golden calf. And all because Moses, on an heroic journey to get law from God, was a little late returning.

That wasn’t the real story. It was the story of idolatry. It wasn’t that the golden calf was the wrong god, but rather that it was about the Israelites knowing what god looked like.They were not being humble—one of the greatest sins in Judaism. And for the 3000 who were killed for making the golden calf, they thought that they knew, and they worshiped their misconception. We cannot know God.

Today’s portion is very short, and maybe my favorite in the Torah. If I had to do it all over again, I’d pop out of my mom today so that this could become my Bar Mitzvah portion. But I’m almost 70 years too late... actually not about. I should have been born 70 years ago on this day.

Moses doesn’t get it. He tells God here that he’d like to know her. And this is just what he had Levi’s children kill 3000 Israelites for doing... knowing. As William Blake said, “Never pain to tell thy love, love that never told can be.”

It is the uttering of such knowledge that makes the feeling impotent. An idea no longer has power because it has been articulated.

Once a little boy went up to a great violinist and asked him how he played this one note. The violinist looked at his violin and could never play that note again.

Moses speaks of his ignorance (not the not knowing kind of ignorance, but the desire to know kind): “For how then will it be known that I have found favor in Your eyes, I and Your people? Is it not in that You will go with us? Then I and Your people will be distinguished from every [other] nation on the face of the earth.” (Exodus 33:16)

Where we have heard that Judaism brought the world monotheism, here (and other places) it is suggested that our God is not a universal god but one that distinguishes Israelites from others.

Even the Christian's “Lord’s Prayer,” “Our father...” suggests that there are other fathers in Heaven.

Perhaps Moses will get it straight tomorrow... That we cannot see or know God, and that is her grandeur.