Rabbi Baker was clarifying why Spinoza got excommunicated. He said it was because of what he did, not because of what he believed. That's encouraging, since I don't believe anything sometimes. And sometimes I believe everything. I like the detail in this parshah. Again it is a meditation. Michael talked tonight about the contrast between the work of building the tent, and the sabbath. Taking a day off still seems foreign to me, perhaps like a deep sleep. But then when I asked what one would do on their day off, he said, “think about spiritual matters.” But that is mainly what I have thought about all my life except when I was dean. Maybe what I need is a day “on” rather than a day “off.” The thought just occurred to me that the work of a craftsman is like the practice of prayer. To do it right, one must be focused on the job at hand, and they much respect their materials and their tools as if they are holy. "Walk as if your feet are kissing the Earth," as Thich Nhat Hahn said. 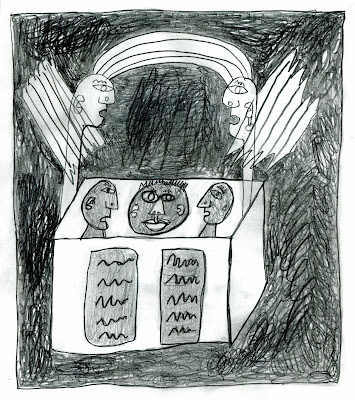