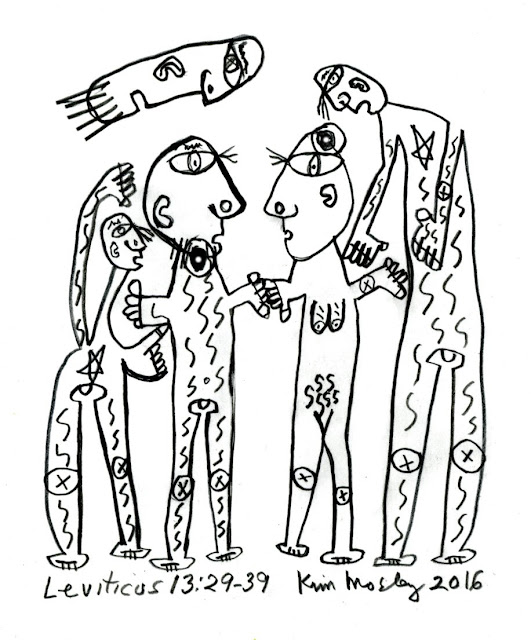 “If a man or a woman has a lesion on the head or on the beard [area], the kohen shall look at the lesion, and, behold! its appearance is deeper than the skin, and in it is a thin golden yellow hair, the kohen shall pronounce him unclean. It is a nethek, which is tzara'ath of the head or the beard.

But when the kohen looks at the nethek lesion, and, behold! its appearance is not deeper than the skin, and there is no black hair in it, the kohen shall quarantine [the person with] the nethek lesion for seven days.” (Leviticus 13:29-39)

Some new thoughts here. I think the Priest/Torah is looking at these external flaws because they are easier to see and admit than our internal flaws. It was easy for me to admit that my arm hurt when I reached for something, while not so easy to admit that my mind in not agile when someone tells me to change what I'm thinking or doing.

I spoke with a rabbi about these Torah portions today. He mentioned that there are usually two things that the priest looks for when trying to determine if the person should be in or out of the community. I mentioned that to be killed for murdering someone there needs to be two witnesses... and they have to warn the murderer before hand (but that warning doesn't relate here). Collaboration is important in the law.

The rabbi continued that he had heard a talk about this section of the Torah, and that the speaker spoke of the great diversity in skin color among the Jews at this time... and that multiple clues were necessary to determine if the priests were looking at an affliction or at the person's normal looking skin.

Then we talked about borderline situations, where the priest would be on the fence whether you were ready to be part of a community or not part of a community. The extremes are easy, the borderline situations are harder. After you send the kid to the cloak room when they were bad, you need to see multiple clues to see if they were ready to come back to the room. My two-year-old grandson has been throwing food at school. They might stop giving him food. How do they determine when they can give him food again? How many indicators do they need?

Then I asked who the priest was trying to protect, the community or the individual. Both, he answered. Later I asked a friend who told me that he thought the priest was giving the people time to grow. Sometimes that is hard to do in a community. I liked that idea better.

When John F. Kennedy said, “Ask not what your country can do for you, ask what you can do for your country” he was focusing on the community being more important than the individual. The problem with this is you could end up with a community where no one's needs are met. Ayn Rand, on the other hand, wrote, “I swear, by my life and my love of it, that I will never live for the sake of another man, nor ask another man to live for mine.” which epitomizes the other end of the spectrum, where the rights of the individual supersede all others. This too has it problems, creating a society where everyone is being stepped on. The middle way seems to be when both the rights of the individual and the community are looked after, as the priest is doing.

P.S. In Torah study today, we never got to the Torah. Someone asked the question about how could they explain to their husband the magic of the sacrifices. Their husband was a doctor, and didn't rely on magic for treating people. The rabbi made a distinction between the simple people who take the bible literally, and the modern people who do not. For the modern, there is no man behind the curtain pulling strings. And he talked of the human realm and the divine realm. I suggested after the class that I see the two as one. He was at first fine with that, but then suggested that I shouldn't see them as the same. I told him about how in Buddhism we spoke of small mind/big mind and how they were both the same and different. I also mentioned the Buddhist adage, “not one, not two.” See: http://www.chinaculturecenter.org/culture/content.php?cid=280&id=412 and if you really want more: http://plato.stanford.edu/entries/japanese-zen/#ZenMeaNotTwo He reminded me to read again Martin Buber (I assume, I and Thou).