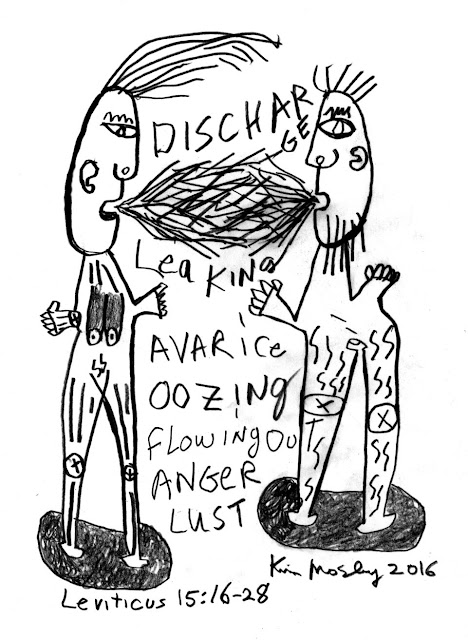 “A man from whom there is a discharge of semen, shall immerse all his flesh in water, and he shall remain unclean until evening.” (Leviticus 15:16)

“If a woman has a discharge, her flesh discharging blood, she shall remain in her state of menstrual separation for seven days, and whoever touches her shall become unclean until evening.” (Leviticus 15:19)

More about discharges here. Remember that “unclean” is not something that one should necessarily avoid, for discharges are inevitable for both the man and the woman. This is not about sin, but rather about whether people should be separated from the community and whether they need to immerse in water before they can perform religious acts (prayer, study of Torah, etc.).

Some say that the women is unjustly punished for menstruating. Maybe she looks forward to this time away from a litter of kids. I suspect my daughter, as much as she loves her kids, wouldn’t mind living somewhere else occasionally and getting a break.

And the man has to immerse every morning unless he stayed up all night studying the Torah. So the bias isn’t clear.

I mentioned yesterday the idea that life is a game. The Torah is the rule book. For those who try to apply the Torah to their lives, they find that their situation might not fit the situation defined in the Torah. So they read the Mishnah and the Talmud for further clarification. I suspect they would also ask their rabbi. They might have to make a decision on their own. For example, what constitutes a discharge? A drop? Two drops?

I like this blog post: Life is a Game and You Make the Rules, especially the part of value statements. We see all around us a range of values. Some think everyone should have the right to own guns, and others believe they should not. Some think that wealth should be redistributed, and others don’t. We believe our values are “right.” The post suggests that wanting them to be right doesn’t make them so. Yet we call your neighbor “stupid” because they don’t share our values.

In Buddhism, there is the concept of Âçrava, which means “leaking,” “oozing,” or “flowing out.” It is a general name for evils, like letting out avarice, anger, and lust. It is not that we won’t feel these urges, but that we don’t have to act on them. I’ve heard it described that we can alternately learn to let them come to their natural end. In the Torah, that is often done with time and immersion, and sometimes capped off with an offering or two or three. Is this another possible reading for the discharges?
Posted by Kim Mosley at 11:26 AM