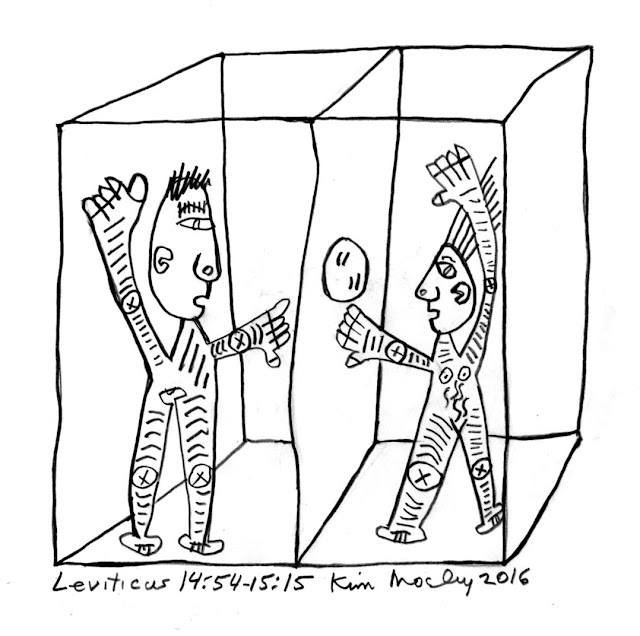 “Speak to the children of Israel, and say to them, If any man has a discharge from his flesh, his discharge is unclean.” (Leviticus 15:2)

Is life a game? Imagine the promiscuous Christian girl who does crazy things on Saturday night and then on Sunday goes to confession and tells it all, only to repeat her crime wave the next weekend. Is she playing a game?

Or imagine the student who buys essays and aces college? Is this someone who is playing the game well? It was pointed out at the college I taught at that if every teacher gave students a second chance when they cheated, the students would be graduating with a high GPA before you could say “Jack Rabbit.”

Is the discharge the result of not taking life seriously? Does “playing a game” necessarily mean that you are demeaning life? Is the discharge metaphorically a spiritual discharge—evidence that we lost our connection to the Lord?

There is that saying, “you are just playing a game.” In the debate tonight with Bernie and Hillary, a question was asked about where the guns in NYC came from, and Bernie laughed. Hillary was very solemn and said this was a very serious matter. In this moment, we saw how her heart had been touched by those families who had lost loved ones in a shooting. It seemed like she was thoroughly invested in reducing guns to save lives.

When we see a serious “player” we sense they are not playing a game. Martin Luther King and Jackson Pollock were not playing. They were fully embodied in their work. We trust each of their messages because we don’t think they were acting. When MLK said, “I have a dream,” he wasn’t (or so we believe) playing. He meant it with his heart and soul. And he’d give his life for that dream. And the same goes with Jackson Pollock. He wasn’t a graphic designer conjuring up a marketable look. He was embodied in his paintings, again as if they were a matter of great consequence.

The discharge is the inauthentic. It is that part of us that doesn’t take the other seriously. We can say “I love you” in a multitude of ways. Do we mean it? We discharge that which isn’t who we are. We insult our inheritance (who we really are, our original nature).

Perhaps, in the case of professional athletes, I’m insulting them by saying that they are just playing a game. They are serious... beyond serious... as is my 14-year-old grand niece swimming champion. She’s activating every bit of her embodied self to beat her own time and the time of others. Maybe the answer is: Yes, life is a game... and games are very serious. I don’t know.
Posted by Kim Mosley at 5:37 AM