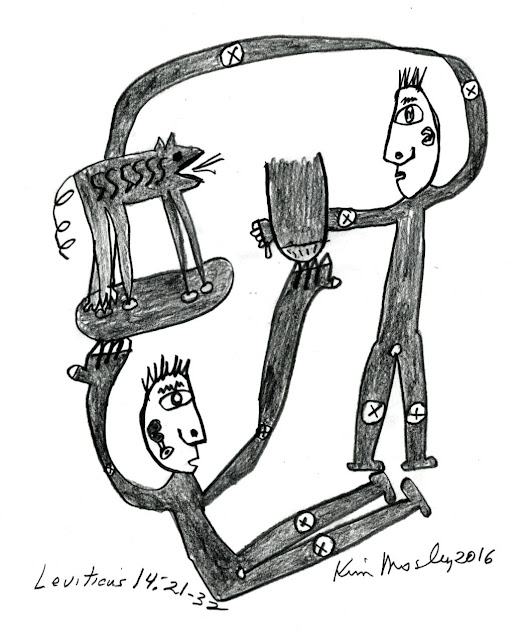 “But if he is poor and cannot afford [these sacrifices], he shall take one [male] lamb as a guilt offering for a waving to effect atonement for him, and one tenth [of an ephah] of fine flour mixed with oil as a meal offering, and a log of oil.” (Leviticus 14:21)

As we all know there are many ways of being fair. Airlines believe it is fair to let supply and demand determine the price of their tickets. Grocery stores charge the same for a given loaf of bread to everyone, rich or poor.

People point to the priests as being fair in making it possible for everyone to have a guilt offering. This points to the importance of the community to the Jews. When someone is carrying around guilt they are less beneficial to their community.

And for the poor man, flour and oil is perhaps equal to a rich man’s goat. The big question in my mind is what goods and services in a society should be charged according to one’s ability to pay, and what should be charged an equal amount to each person.

I pay more on real estate taxes. I’m not sure that the services I use are in proportion to what I pay.

“And the kohen shall place some of the oil that is in his palm, on the cartilage of the right ear of the person being cleansed, on the thumb of his right hand and on the big toe of his right foot, on the place of the blood of the guilt offering.

And what is left over from the oil that is in the kohen’s palm, he shall place upon the head of the person being cleansed, to effect atonement for him, before the Lord.

This is the law of one in whom there is a lesion of tzara’ath, who cannot afford [the full array of sacrifices], when he is to be cleansed.” (Leviticus 14:28–32)

I’m confused here. It seems after the guilt offering, a sin, a burnt offering, and a meal offering are done. Enough is enough!

Look, though, at how much care is performed to make sure that the person has been cleansed. Even after the symptoms have gone away from the tzara’ath. My two year old grandson was throwing his food. We took his food away and he promptly stop. So we could now think we solved the problem. But maybe we just removed the symptom of some deeper problem. The ancient Jews were taking no chances.

The proof is in the pudding. The man who had tzara’ath did something far more serious than having a rash. The Jews took indiscretions as a big threat against the community and as something that needed to be dealt with completely. You have a cockroach in your house. You can either step on it and say the job is done, or you can sprinkle boric acid along the baseboards and outside. You won’t see any more after a couple of weeks. That’s what the priest made sure of. Next time, the person will think a little more about their behavior.
Posted by Kim Mosley at 9:13 PM