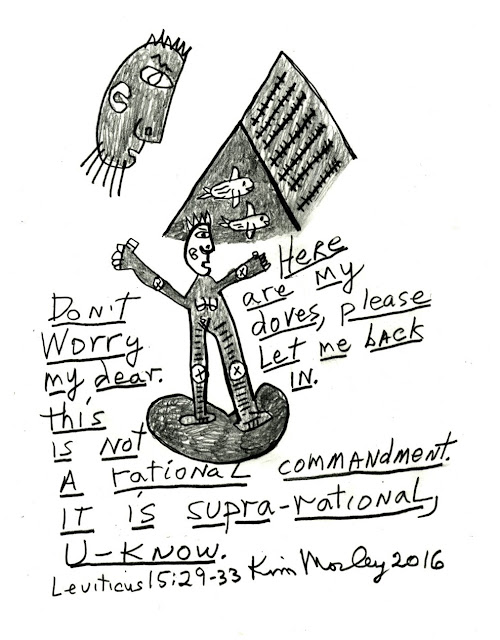 “And on the eighth day, she shall take for herself two turtle doves or two young doves, and bring them to the kohen, to the entrance of the Tent of Meeting.

We try hard to understand these laws, using every bit of our rational mind. Many of the laws we can rationalize, that is, we can see that the world will work better if we follow them. An example of them it that we should not do onto others as we would not want them to do to us.

But other laws, such as the law concerned the exiling of a women who is menstruating, are called chukkim, which means that they are decrees from God and cannot be rationalized. In a sense, we do them a disservice when we try to rationalize. A good attorney can justify any action. Anything can be rationalized. But not necessarily understood for what it is.

The obvious question for an outsider like myself is whether I want to follow laws that are not logical. A law against text messaging while driving makes sense, especially if we are going to trust the statistics. But a law about not kissing in a public place... well, maybe not.

I suspect we have a huge number of conventions that we follow because we've learned to do them. In a sense, that makes us part of a group when we obey, and an outsider when we do not. Some of the streets in Austin are narrow. When you see someone coming in the opposite direction one person should pull over. The convention is that you pull over if you are able and let the other car through. Some outsiders just rush through, and force you to play “chicken” with them.

Starting in the Garden of Eden, humans make choices, and having the ability to make choices makes us human. The world is filled with opposites, including the idea that some behavior (voluntary or involuntary) makes us clean or unclean.

In Buddhism there is a heavenly realm where things are like we'd like them to be, and the human realm where we can follow our habitual patterns... or we can create new karma. That is the best realm to be born into. That is our choice at all crossroads. For example: you are cut off when driving... you can raise your middle finger, or realize that you don't know what kind of day the cutter offer has had. You have a choice and that makes you human.

In a homogeneous community, the penalties if you rock the boat are severe. In America, you can rock the boat with less criticism because we are so diverse. You'll have many on the sidelines either cheering or booing, as we see with presidential candidates that don't follow their party's line.

What about the dying on account of their uncleanness? Is that to get us to follow the commandments? Or is it metaphorical, saying that if we don't pay attention and make the right choices, we'll be shunned from our community? Remember that God says to Adam and Eve in the creation story that they will die because they did not obey God.

Life is a serious business. Which may be why some don't like to think of it as a game, which is what I proposed yesterday.