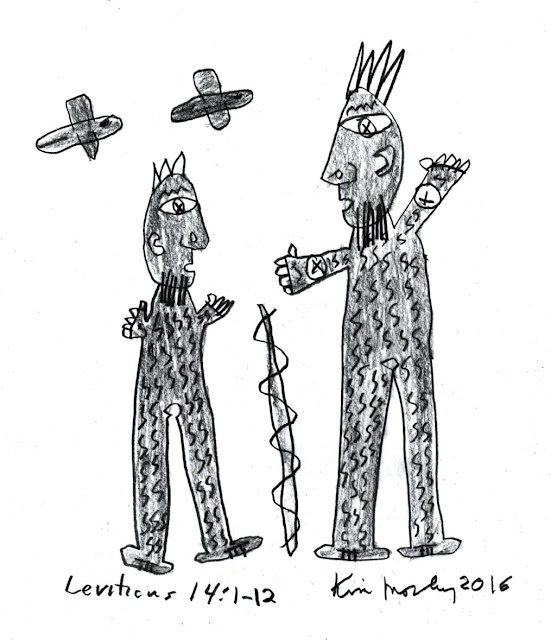 The kohen doesn’t cure the tazria nor was it caused by anyone but the individual themself.*

I say this partly because when the tazria (rash) is gone, the kohen/priest does a guilt offering. If it was caused by God because of something someone did, how could a priest fix it without being God or as acting as an agent as in some other religions.

Is the message here that “bad things don’t happen to good people”? Of course, we know better now.

Two birds are brought for the offering. We assume that they are both birds without flaws. Yet one lives, and one is sacrificed. We should assume that the Jews though that their own lives were worth more than the birds’ lives.

It would be simple to think that the one who flies off is the one who lives. But perhaps being used for a purpose (as a sacrifice to God) is living, and flying off—away from one’s community—is dying. It is interesting that for the exiled man, becoming part of his community is desired, while we think that for the bird, flying off and not becoming a sacrifice is the best choice. Perhaps I'm missing the boat. Time for bed.

Sleeping on this, I realized that both birds have an equally important task. One is burned for God. And the bird that flies off, with the blood from the first bird on its wings, takes the sin off into the heavens. It would have been a cruel joke to threaten both birds with death, and only kill one of them.

At the end of the year Buddhists write down their sins and burn them in a fire. Another example of letting go and being reborn like a phoenix.

Even when the tazria is gone (which is a function of time), the guilt remains. That is what needs to be cleaned up before reentry into the camp.

How does the offering work? Is it a magical potion? I don’t think so. This isn’t herbal medicine or witchcraft. It is the intention and practice that erases the guilt. In other words, and I might be all off here, it would be a kind of idolatry to believe that a concoction in itself could fix guilt. Repair is God’s domain. The priest, too, has no special powers. He just knows the motions to start the ball rolling for the guilt to be removed. Though I understand that blood does have special power, so that is an exception in these offerings. But the blood still isn't a potion that cures the individual. Rather it is a vehicle for the sin to be removed from the individual as the released dove flies into the heavens.

This is not to say that there weren’t healers. There were, and they continued through the ages. But here, God needed to be appeased and the sin needed to go off into the heavens.

P.S. We been having some discussion on Facebook where I post these (https://www.facebook.com/mrkimmosley) about what are the scriptures... is it the painting (Torah), or is it how people live it (Oral Torah)? “To see it at all, you had to be there. In a way, he [Robert Irwin] was proposing a new kind of “action painting.” The action in his version was generated not by the hand of the artist and embodied in frozen strokes of paint, but by the mind and eye of the viewer, approaching art, taking it in and reacting to it in real time.” —Holland Cotter/NYTimes

P.S.S. Going back to the house with Tazria... Rabbi Baker says that “the Rabbis teach that the home is a “mikdash me’at,” a sanctuary (or altar) in miniature,” hence the concern that it was “clean.”

P.S.S.S. *—some say “themself” is not a word. It is a funny contradiction, as them suggests more than one, so how can there be a singular? But be assured that it was used as early as the 14th century and is now being revived.
Posted by Kim Mosley at 2:24 PM