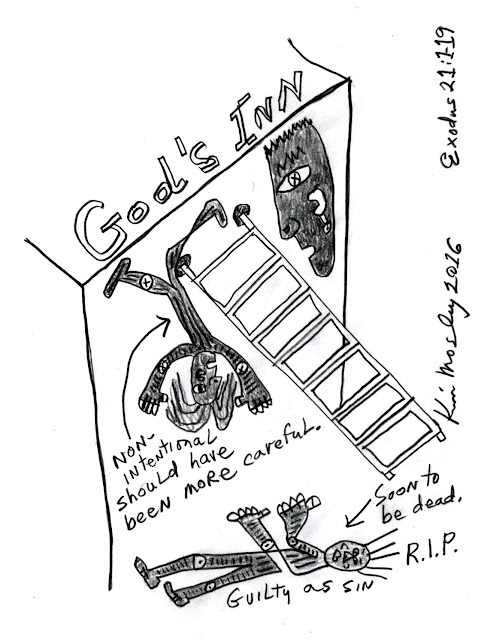 In Exodus, Chapter 21, we have a number of laws given by God.

The idea of a God actually dictating to a man seems preposterous. Maybe Moses was delusional, or maybe a lier. In any case, the laws have more force coming from the divine.

Many of the laws are what I’m seeing as vectors. They have a mixture of justice and mercy. For example, should you buy a Hebrew slave, he shall work for six years and be free in the seventh. The rabbis questioned about whether a Hebrew slave is a slave who was a Hebrew or a slave that belonged to a Hebrew. Sometimes, if one owed money, the court would sell the individual to pay off his debt. Rabbi Kerry Baker pointed out that we would treat our slaves well because we might be their slave some day. I wonder if this thought came into their heads.

The vector? The justice is that the slave could pay off his debt and make restitution to the injured party. The mercy is that he would be let free. The Israelites remember that they were once slaves. The vector’s direction is to eliminate slavery, the point being justice and the direction being mercy. But we are not there yet.

If the slave comes to you alone, he should go out alone. If he marries one of your maid servants, and has children... the maid servant and the children do not go with him in the seventh year. But if his love is so great that he doesn’t want to leave them, he can choose to become a slave forever. An awl will be put through his ear at the doorpost, and he shall serve his master forever (I assume he doesn’t become part of the estate if the master dies).

I like how nothing is absolute in Judaism. If you do something bad, there is something you can do to make it right. There are rules and exceptions. It makes ruling more complicated. I taught at various colleges and they all delt differently with exceptions. At the School of the Art Institute of Chicago, every situation was an exception. I don’t think there were rules. If there were, they were will-hidden. On the other hand, St. Louis Community College had will-defined rules without any means to break the rules. I was fortunate to experience the extremes of the continuum. One was about mercy, and the other about justice. Mixing the two is what Moses (via God) is appearing to do.

Another law said that a man who had unintentionally killed another man should be exiled should the event be witnessed. “But one who did not stalk [him], but God brought [it] about into his hand, I will make a place for you to which he shall flee.” A midrash interprets: