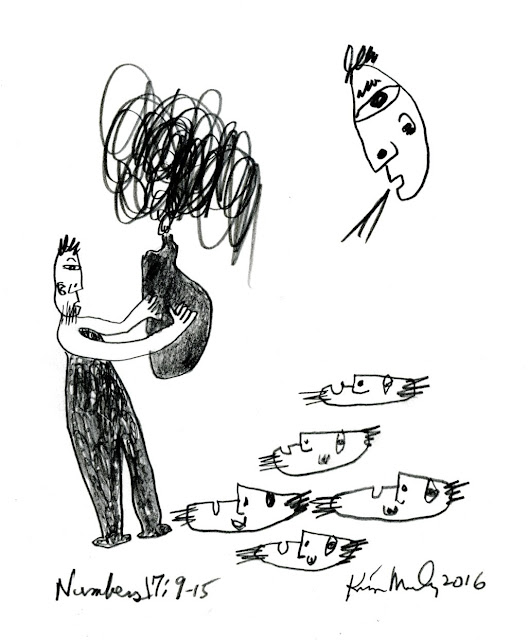 Yesterday the Lord “created a creation”... a opening in the Earth that buried all the Korah’s supporters.

Then the entire congregation complained to Moses and Aaron, complaining that they had “the killed the people of the Lord.”

I thought that was an interesting phrase. They were those without faith, so why were they “of the lord.” I suppose they were “the people” because they had been “chosen.”

In today’s portion, the Lord consumes those with a plague who complained that the complainers were devoured by the Earth. Aaron runs in the midst of the assembly with some incense and he atoned for them. Soon the plague stopped, but not before 2000+ were killed.

My reading of all this is thus: God doesn’t really cause harm on specific people. We cause harm on ourselves when we don’t have faith. When we want the world to be different than it is, disappointment and unhappiness set in. The plague is dissatisfaction.

The incense that Aaron ran with to stop the plague was his way of connecting to/appeal to God... but really, since I don’t believe in something that messes with nature, I think of the incense as Aaron’s way of showing that they will be taken care of by a merciful God, as opposed to the vengeful or just God who caused the plague to those who didn’t understand the importance of faith.