I went to the “Purim” service tonight but then started to feel terrible that Haman was so hated by the Jewish people. All the kids in the temple were shaking rattles every time Haman's name was mentioned. I felt like I was in a Nazi youth camp with, over and over again, hate was being drilled into the kids. One might argue that hating the Jews is bad because the Jews are good, and hating Haman is good because he was a villain. But “hate” makes be feel sick inside. It is not something that should be encouraged with kids (or adults). I'd be more interested in a compassionate approach to Haman.

An interesting day in Torah study today with Rabbi Folberg. We read some commentary from Aharon-Ya’akov Greenberg (1900-1963). In his <i>Iturei Torah</i> he quotes Rabbi Shimon saying that “Anyone who is occupied in the study of the Torah has no need of burnt offerings, meal offerings, sin offerings, or guilt offerings.” “Sacrifice” (korban, le-hakriv) is from the same root as “to come near, to approach...to become closely involved in a relationship with someone.” When we read the Torah, or when we make an offering, we get close to G_d.

“And Moses did as the Lord had commanded him, and the community assembled at the entrance of the Tent of Meeting.”

In this parshah Aaron is anointed, making him officially a leader. The entire community watched from the entrance of the Tent. 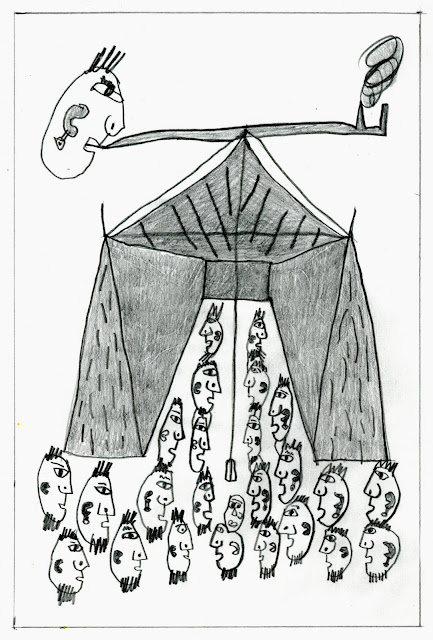