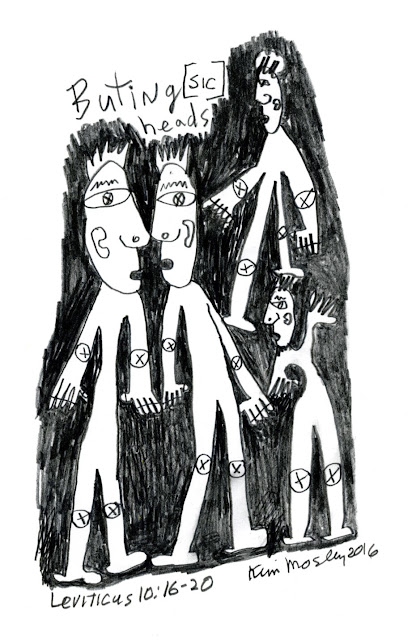 “Now Moses diligently inquired about the goat of the sin offering, and behold, it was burned up! And he was angry with Eleazar and Ithamar, the surviving sons of Aaron, saying, ‘Why have you not eaten the sin offering in the place of the sanctuary, since it is a thing most holy and has been given to you that you may bear the iniquity of the congregation, to make atonement for them before the Lord? 18 Behold, its blood was not brought into the inner part of the sanctuary. You certainly ought to have eaten it in the sanctuary, as I commanded.’ And Aaron said to Moses, ‘Behold, today they have offered their sin offering and their burnt offering before the Lord, and yet such things as these have happened to me! If I had eaten the sin offering today, would the Lord have approved?’ And when Moses heard that, he approved.” (Leviticus 10-16-20)

In Buddhism, there is a process called transmission where an exchange occurs between teacher and student. Though the teacher would have been previously transmitted, and the student had not, it is a two-way exchange.

In the same way that Moses sometimes talks back to God and tells him to “cool down,” here in this lovely interchange, Aaron speaks back to him brother/mentor Moses... and Moses is pleased.

Here is one more educational lesson. The teacher can learn from the student. The teacher can be wrong and admit it when presented with the facts. Aaron is allowed to save face, after both failing in his solo offering last week to bring the Lord to the Tabernacle, and then in failing to properly train and supervise his two sons so that they die.

Moses now tries to be a better teacher to Aaron, telling him that he made an error in the offerings. But the lesson turns out far greater than correcting an improperly performed temple offering. The lesson is to admit to your student that you are wrong. Well, done, Aaron for standing up to Moses... and well done, Moses, for admitting that you were wrong.