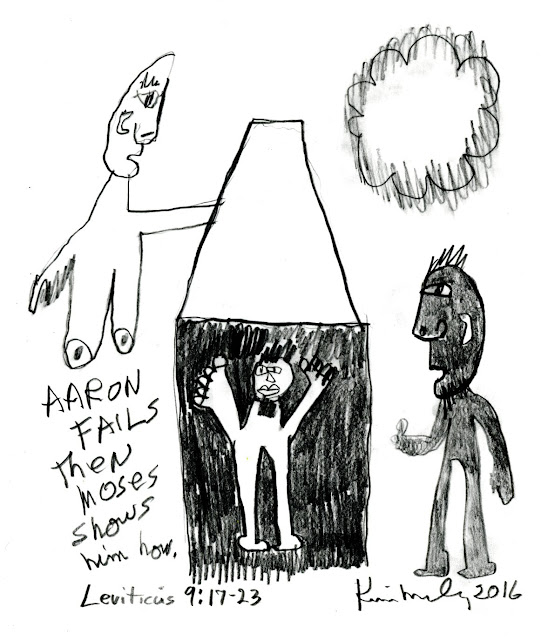 “And Aaron lifted up his hands towards the people and blessed them. He then descended from preparing the sin offering, the burnt offering, and the peace offering.

And Moses and Aaron went into the Tent of Meeting. Then they came out and blessed the people, and the glory of the Lord appeared to all the people.” (Leviticus 9:22-23)

In a midrash for these verses some interesting angles are revealed. The people are hoping that Shechinah  (the female form of God) will appear when Aaron does the offerings, and she does not. Today we do not focus on the expectation or merit for our efforts. We do not judge God by the quality of our lives... or at  least, we shouldn’t.

Aaron becomes angry at Moses because he is humiliated that the magic did not work as the people hoped. This would be like a magician who pulls a rabbit out of a hat except the trick fails and a rat appears instead.

In any case, Aaron’s brother and mentor, Moses, accompanies him back into the Tent and this time Shechinah appears. This foreshadows (once more) what happens if you don’t do the offering right, which causes the death of two of Aaron’s sons.

But what does it mean “to do it right”? It is not only the gesture, but how one communicates with the Lord... the authentic... was Aaron just doing the gestures?

We say “I love you.” They can be empty words, or they can move a mountain. It is not enough to say the words. To get Shechinah to appear we need to be there wholeheartedly.