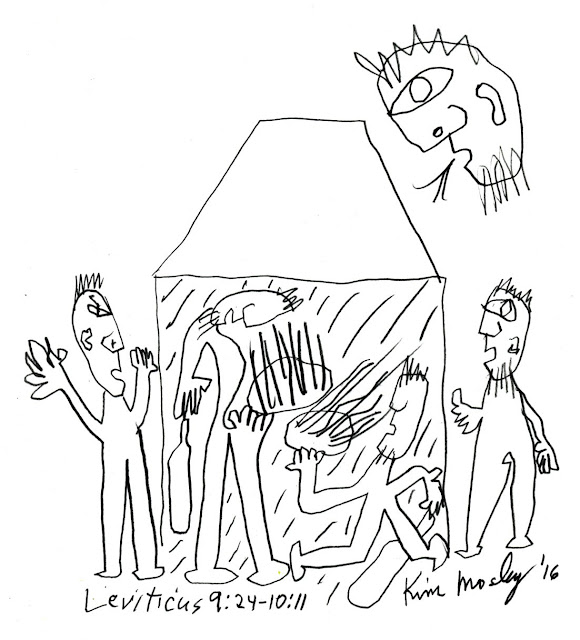 “And fire went forth from before the Lord and consumed the burnt offering and the fats upon the altar, and all the people saw, sang praises, and fell upon their faces.

And Aaron's sons, Nadab and Abihu, each took his pan, put fire in them, and placed incense upon it, and they brought before the Lord foreign fire, which He had not commanded them.

Then Moses said to Aaron, "This is what the Lord spoke, [when He said], 'I will be sanctified through those near to Me, and before all the people I will be glorified.' " And Aaron was silent.” (Leviticus 9:24-10;2)

For me, this portion is all about many elements of teaching.

1) Moses and Aaron do the job right and the Lord appeared. They had been told to do the offerings, they knew the forms, and they did them wholeheartedly.

2) Aaron's sons try to follow suit, but they missed some important ingredients: they weren't told to do it, and they might not have had the right state of mind. Some say they were drinking because a few lines later we are told, “Do not drink wine that will lead to intoxication, neither you nor your sons with you, when you go into the Tent of Meeting, so that you shall not die.” (Leviticus 10:9)

We don't know if they were intoxicated with wine, or if they acted as if they were not in control of their faculties.

But why was their dad silent when they were killed? Because there had been warning "and you will die" before this portion, and more importantly, people in a community are responsible if anyone messes up because they could have been a better guide. Aaron is at fault when his sons are at fault. He was given the greatest of all punishments: losing his sons... greater than losing his own life. It was Aaron who really died because he had not properly guided his sons. And he could not complain.
Posted by Kim Mosley at 8:55 PM