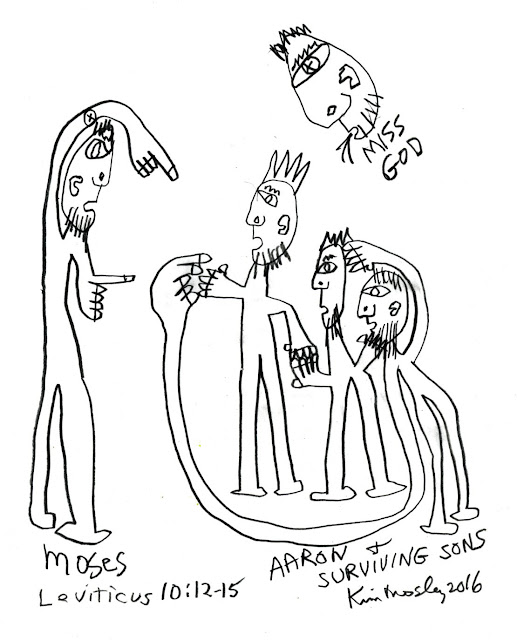 “And Moses spoke to Aaron and his surviving sons, Eleazar and Ithamar, ‘Take the meal offering that is left over from the Lord's fire offerings, and eat it as unleavened loaves beside the altar, for it is a holy of holies;...’”(Leviticus 10:12)

We are reminded that the altar is the holy of holies. I suspect that only God herself would be more holy. Given that there are no extraneous words in the Torah (as some say), the repetition is a kind of explanation to Aaron why his two sons got zapped. The phrase “surviving sons” suggests that the other sons should have been zapped as well for the sin of the Golden Calf. If God was only vengeful then they would have been, but as a merciful God, two were spared. I think it also suggests that there is not a one-to-one correspondence between the act and the penalty.

It is interesting that two of the most serious indiscretions didn't have to do with what one person did to another, but rather with a lack of faith in God. Being the skeptic that I am, it seems natural that one would doubt or not follow God from time to time. But no, this is the most grievous sin. Disobedience.

Let's suppose that God is not out there but rather in here. Disobedience then would be not following your heart—not being true to oneself. And sometimes it is returning to our original self. When we don't do this, there is no life left in us... reiterating  God's prediction, “...and you shall die.”