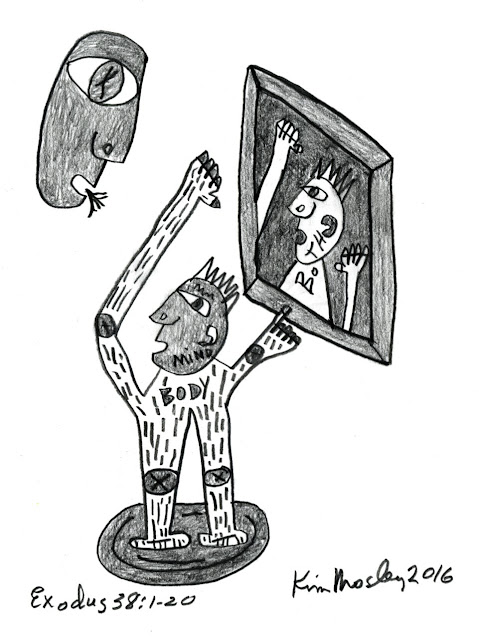 “And he made the washstand of copper and its base of copper from the mirrors of the women who had set up the legions, who congregated at the entrance of the tent of meeting.” (Exodus 38:8)

Moses didn't want to take the copper mirrors, but God changed his mind, saying the mirrors were good because making babies is good.

Do we still have that disagreement today? Is sex something that pleases God?

I'm interested in the mirror in another vein today. When we see others, we have no problems combining their mind and body into a singular phenomenon that stands in front of us. Not so with ourselves. We are the perceiver, separate from our bodies. But then, when we look in the mirror, we magically become one. In photography we have a rangefinder focusing system where two images become one. This happens when we look in the mirror, though it is not two images but rather a mind and a body coming together.

N says that he doesn't have a sense of himself. He feels he is "thinning out, becoming diaphanous, slipping away." I wonder if that is also a strong sense of self, except his sense is that the self is fading. In any case, it is a sense of a non-material entity.

So I go in the bathroom and look in the mirror. My God, I think, I'm right over there, merged... reversed, but there, all the same. I can now see myself as only others see me—or so I believe.