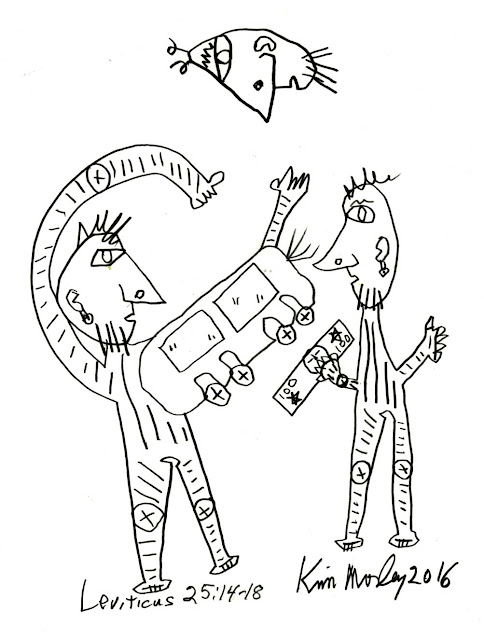 “And when you make a sale to your fellow Jew or make a purchase from the hand of your fellow Jew, you shall not wrong one another.” (Leviticus 25:14)

This is a big topic for discussion by both the rabbis and atheists like Dawkins. Though the word “Jew” doesn’t occur here in the Hebrew, the particular word, “fellow,” meant a Jew.

One reading of this is that it is okay to wrong someone who isn’t a fellow Jew. Logically this is a stretch. If I say that the food at Safeway is safe to eat, I’m not saying anything about food at other groceries.

Later in Leviticus we read, “The stranger who sojourns with you shall be as a native from among you, and you shall love him as yourself; for you were strangers in the land of Egypt. I am the Lord, your God.” (Leviticus 34:19) This seems to put to rest the idea that the Jews don’t care about others. Though I wish that the argument wasn’t “that we were strangers in the land of Egypt.” First off, as strangers they were slaves. They were not treated well. And for another, are we only good to others because they were good to us? Or that we know how it is to be a stranger, because we were abused? Is the justification for our moral code simply that one will benefit if everyone follows it? That sounds more like pragmatism.

Another argument is the incremental one, that we (individually or collectively) practice fair play and generosity on larger and larger groups as we grow up. First it is one’s family, then the neighbors, and then everyone.

How is it that a president can talk about killing an enemy with pride, and condemn another for killing as if they were the scum of the Earth? Aren’t each a sentient being? I’m starting to stray here. Time to do a drawing.